Time to review The Old Devils, by Kingsley Amis, eh? Let me get some supplies.

First into the cargo space went, in quick time, a carton of drinkables: twelve-year-old Scotch, classy spring water to put in it, gin, tonics, a rare bottle of Linie-Aquavit from Oslo, a much commoner bottle of Bailey’s Irish Cream…one each of Asti Spumante and Golden Sweet Malaga…four large cold Special Brews in wet newspaper...and a spot of coffee liqueur and other muck…

That, my dears, is what the star couple of old devils takes with them on a four-day trip with one other couple. There is so much drinking in this novel, that I often felt vicariously dizzy.

The story is set in motion by the return to Wales of Alun Weaver, Welsh poet and TV personality, and his wife Rhiannon, after several decades’ absence. Their arrival stirs up a brew of old loves, losses, and resentments, many of them acted out in bars and other drunken revelries.

Most of the characters are of retirement age, and the book begins with a careful description of each main fellow’s morning routine, right down to one’s constant struggle with constipation. But there are tender moments too, such as insights into decades-old relationships, as well as brutally honest observations on literary academia, the role of wives, and the modernization of Wales. I can’t say I got all the Welsh jokes, but I got enough of the humour to be laughing out loud more than once. So grab a scotch and tuck in.

Posted by Stephanie Turner at 2:28 PM No comments:

Here's a fun way to celebrate 50 years of the Booker prize: experts are choosing the best Booker winner from each decade, then the public votes on the best book of all.

Posted by Stephanie Turner at 4:11 PM No comments: 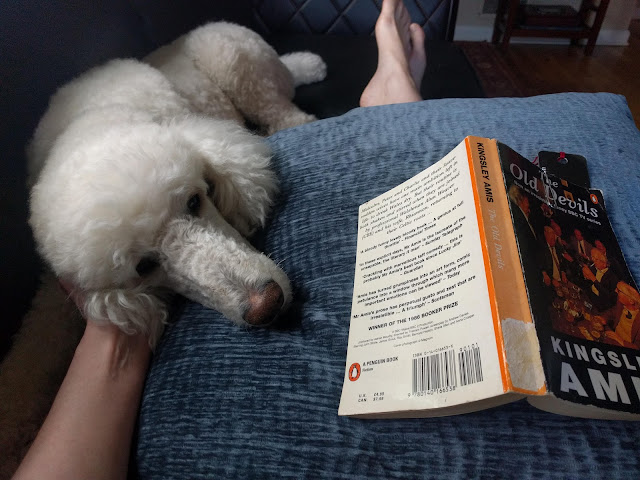 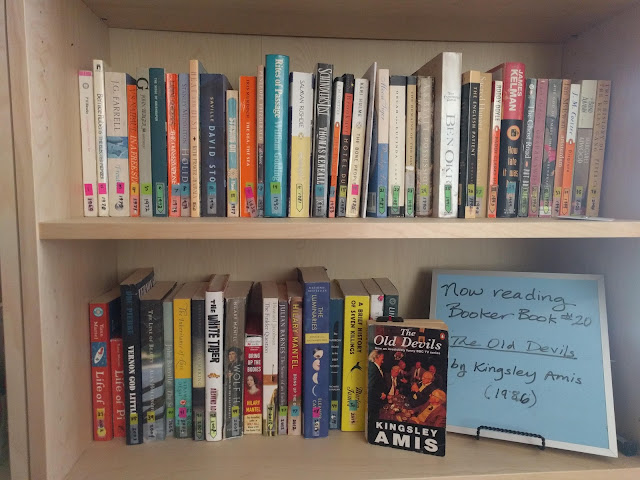 Posted by Stephanie Turner at 11:38 AM No comments:

I am so glad I am past the books about British colonies written by colonizers (at least, I hope I am). Though many of them are heartfelt, there is something less engaging in reading about guilt, than in reading about the experience of the colonized. I guess I’d rather read a victim’s memoir than an abuser’s, no matter how enlightened the abuser may have become. 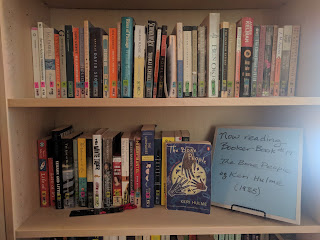 Anyway, The Bone People is only partly “about” New Zealand’s experience as a British colony. The history between Maoris and “Pakeha” (white folks) simply forms the backdrop to a three-part relationship puzzle.

I haven’t usually named characters beyond the protagonist in these reviews, but all three of these must be named, because they are all three protagonists. Kerewin is part Maori and all recluse. After a mysterious falling-out with her family, she used lottery winnings to literally build a tower and isolate herself in it, Bruce Wayne-like. She’s hard to sympathize with at first, as she cuts a somewhat unrealistic swashbuckling figure: a rich but failed artist who drinks too much, wears silk shirts, smokes cigarillos, and has some uncanny physical skills. But the other two will find the cracks in her armor.

The hinge that holds the three together is Simon, who shows up uninvited in Kerewin’s tower one day. She doesn’t like kids, but does due diligence in getting him back to his people. It’s a little harder than you might imagine, because he doesn’t speak. And he’s white.

Finally, the third panel in the triptych is Joe, Simon’s adoptive Maori dad, a factory hand, who does not make a great first impression on Kere. The way these three gradually become inseparable becomes more interesting even than the mystery of where the white boy came from and why he does not talk.

Posted by Stephanie Turner at 3:22 PM No comments:

I am so happy that the Booker Project introduced me to Anita Brookner. I was already biased in favor of this book before even opening it, because it has a French title. Then I started reading it and fell in love. I felt like I was reading a Carol Shields novel set in Switzerland instead of North America.

Edith Hope, author of romance novels, arrives at the Hotel du Lac in disgrace – but we will not learn why until about two-thirds of the way through the book. Meanwhile, she observes the women around her – for the hotel is mainly populated by women. They all seem to conform to a type at first, but all present some sort of surprise by the end. There are the mother-daughter pair whose ages keep having to be revised upward, the elderly lady abandoned by her son, and a wraith with an eating disorder and a pocket pooch.

The vacation-cum-exile atmosphere is slightly surreal, reminding me of Stanley Middleton’s Holiday, also about a character who has extracted himself from relationship trouble to gain perspective.

I won’t spoil anything, but I feel the ending was rushed. I wish this book had been twice as long, allowing Edith’s own romance, and character, more time to bloom. But I will definitely be reading more Anita Brookner.

Posted by Stephanie Turner at 4:19 PM No comments: 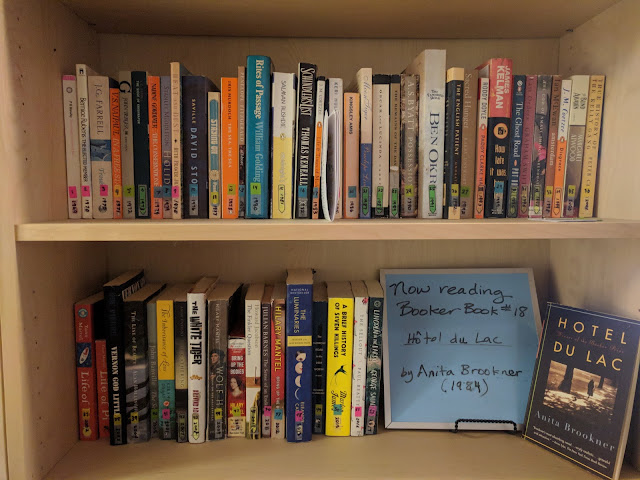 So excited to read the book with the French title! :D
Posted by Stephanie Turner at 4:25 PM No comments:

Life & Times of Michael K by J.M. Coetzee (1983) is an oddly moving little book about an oddly moving little man. Michael K is an unlikely protagonist. The book begins with his mother’s revulsion at the cleft lip he is born with. Michael spends his school years in an institution, visited by his mother, then becomes a gardener. He cares for his sickly mother until the growing social unrest in their city of Cape Town, South Africa, threatens to take away both their jobs. After a riot in their neighborhood, she persuades him to take her to the countryside where she grew up, but she dies before they arrive. 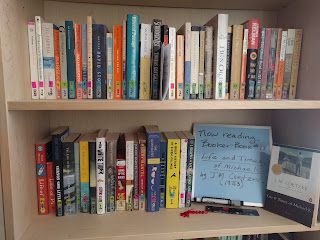 At this point, Michael is cut loose. The first two-thirds of the book is the oddly clinical chronicling of his long and lonely path. He is picked up as a vagrant and spends time in a camp where he is told he is not a prisoner, but that he will be shot if he tries to leave. He eventually finds the farm where he thinks his mother lived, and secretly plants a pumpkin patch, living like an animal in a burrow, before he is picked up and sent back to camp. Michael wonders why he must do as he is told, but never seems to get emotional. He simply leaves when he can.

Part two starts out clinically as well, as it is told from the point of view of a medic in Michael’s last camp. However, this man becomes moved by Michael’s case, almost in awe of the quiet man’s unreachability, and dreams of following him back to the country when Michael escapes yet again. He even starts addressing his musings directly to Michael:

You have never asked for anything, yet you have become an albatross around my neck. Your bony arms are knotted behind my head, I walk bowed under the weight of you.

I take this to mean that the white colonists have created a huge burden for themselves by taking away the natives’ freedom; each man comes to represent his race. However, one of the remarkable things about Michael K is that Coetzee never once describes a person as black, white, or colored. I can only assume that Michael is black or colored, and that the medic is white. Finally, the very brief part three finds Michael back in Cape Town, and willing to tell his story to other people surviving by their wits, away from the camps.

I am reminded of several other works: first, the South African setting reminds me of Nadine Gordimer’s The Conservationist, also about race, and farming. Michael’s last initial, K, as well as the thoughtless bureaucracy that labels this harmless gardener as an arsonist and guerilla, makes me think of Kafka’s The Trial. Finally, the life-or-death bleakness of Michael’s travels through a war-torn landscape reminds me of Cormac McCarthy’s The Road. Like The Road, this novel is moving without being sentimental. I look forward to reading Nobel prizewinner Coetzee’s next Booker winner, Disgrace (1999).

Posted by Stephanie Turner at 3:40 PM No comments:

I saw the movie Schindler’s List when it came out, and found it heart-breaking and heart-warming at the same time. I did not know that it was based on a book originally entitled Schindler’s Ark.

This is the only Booker winner so far in my project (I’m up to 1982 now) that is not pure fiction. And though Keneally says in the “Author’s Note” that he will use the “texture and devices of a novel” to tell the story, I did not find that it read like a novel. Keneally frequently reminds the reader that the conversations are recreations, and tells us the source or sources for every incident. It’s really a very documentary-like retelling, and I think that is the right choice. We must continue to remind ourselves and the world that the horrors of the Holocaust really happened, and not romanticize them by letting them sound like fiction.

It’s the highly interesting tale of Oskar Schindler, who started out as a war profiteer, then became disgusted by the Nazi policy of Jewish extermination. There are many harrowing individual stories here, of families who watched loved ones die for the most whimsical of reasons. But one of the most harrowing has to be that of Schindler himself, when the tables are turned after the Allied victory. He must wear prison garb to sneak out of formerly German territory. He never regains his old Midas touch, and comes to depend on those who once depended on him.

It’s a wonderful read for the repeated lesson that it is always possible to do the right thing. I have to wonder, though, if Keneally’s other work is worth reading. For example, nearly every time that Oskar Schindler speaks, he “growls.” It’s not the writing that makes this an extraordinary book; it’s the story.

Posted by Stephanie Turner at 10:53 AM No comments: