This is a great book. A great f***en book, as our hero, Vern, would say. Vernon Gregory Little is a little guy accused of a big crime: the mass murder of over a dozen of his Texas classmates. But he didn’t do it. He just can’t prove it.

Poor Vernon is trapped in a web of loyalty: to a sad mother, who falls for the scumbag televising his case; to a girl who passed out at a party; to a father whose body can’t be found; to the bullied friend who actually did the shooting. He’s the sweetest kid you’d ever hope to meet on death row.

Vernon’s desperate attempt to escape his fate is both gritty and lyrical. And up until the last ten pages, I had literally no idea how it would end. Pierre brings all the pieces together masterfully, and Vernon recreates himself as (almost) a god. Poetic writing and a show-stopping plot, plus a quirky character you can’t help but love: it’s definitely worth the read to see how Pierre pulls it off.

Posted by Stephanie Turner at 7:26 PM No comments: 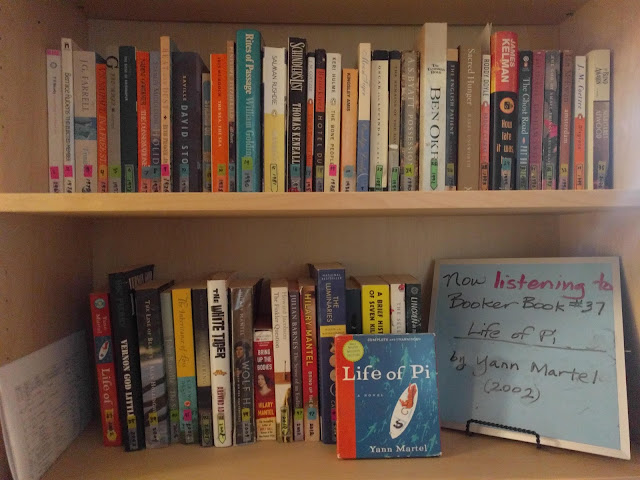 So I tried reading Life of Pi a couple years ago. I didn't finish it, for reasons I won't go into now, because I don't want to prejudice you against it. This time around, I'm trying to finish it as an audio book. Wish me luck!
Posted by Stephanie Turner at 7:11 PM No comments:

Having finished book number 36, I am ready to tackle book 37, Life of Pi. This is the only Booker book that I started to read but could not finish. So I'm going to give it a second chance as an audio book. However, I am in the midst of listening to another audio book, That Old Cape Magic, by Richard Russo (which I'm really enjoying, by the way). So I'm skipping ahead to book number 38 now. 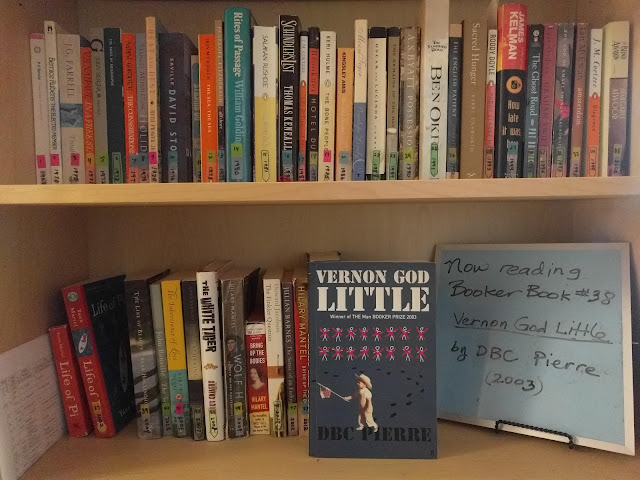 Posted by Stephanie Turner at 2:24 PM No comments:

I'll tell you up front that I liked this book better than Peter Carey's previous Booker Prize winner, Oscar and Lucinda, which I found frankly boring, as I did not find either character likable or compelling. However, I am relieved to report that I enjoyed True History of the Kelly Gang.

Ned Kelly is the Robin Hood of Australian folk history. An actual historical figure, Ned was the son of Irish immigrant parents who struggled to make their way in the colony. Ned recounts his childhood of poverty, with multiple siblings and a dad in jail, and later apprenticeship to a bushranger, or highway robber. Ned tries to go straight but finds this very difficult for a person of his class. Finally, the Kelly gang coalesces, out of necessity rather than anyone's intention.

The story is told in a style that I found off-putting at first: it is very similar to How Late It Was, How Late, by James Kelman, but True History is not exactly stream-of-consciousness. It is simply the product of a mostly self-educated immigrant, writing sentences with little punctuation. Even by the end of the book, I was having trouble finding where one sentence ended and the next began. This run-on narrative, presented as found parcels, like scrapbooks, is occasionally interrupted with news articles, comments by Ned's wife, and even a couple of pages torn from a collection of Shakespeare's plays. Of course, True History is not really true, but fictionalized.
I found the story and the characters compelling. I felt great sympathy for Ned, his family, and friends. I am glad to have met this Australian folk hero, and to have learned more about the plight of the Irish in early Australia.
Posted by Stephanie Turner at 6:10 PM No comments: 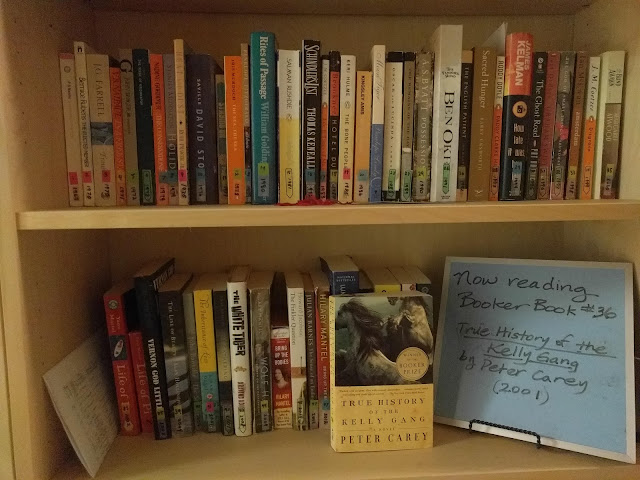 Posted by Stephanie Turner at 7:18 PM No comments:

Two young women, raised in relative isolation, meet an attractive, mysterious young man. What happens next involves sex, secrets, and sacrifice. In The Blind Assassin, Margaret Atwood weaves together multiple story strands as skillfully as A.S. Byatt does in Possession: the view from the present and the vintage love story are interspersed with news articles about war in Europe and local tragedy that enhance the threatening mood. Fans of the author of The Handmaid's Tale will recognize recurring motifs: Atwood's cunningly analytical take on language; religious delusions; the ways society exploits women; and the ways women resist. Her science fiction also makes an appearance in the pulp stories penned by the mysterious young man.This is a masterful novel, with a reveal as slow and enticing as a skillful burlesque show. I am so grateful this project required me to reread it. I hope that Atwood wins the Nobel Prize in literature soon, as the most recent winner Kazuo Ishiguro said she should have.
Posted by Stephanie Turner at 8:35 PM No comments: