Back to the Bookers: #23, The Remains of the Day, by Kazuo Ishiguro

Before this project, the only book I had read by Kazuo Ishiguro was Never Let Me Go. I picked it up not because of the author, but because I love science fiction, and I understood that it was about clones. As a work of science fiction, Never Let Me Go was disappointing; however, it, like The Remains of the Day, is a meditation on being human. It would be nearly impossible for me to discuss these two books at any depth without some ***spoilers***, so consider yourself warned.

From the very start, our narrator and hero, Mr. Stevens, asks himself the question, “What does it mean to be a great butler?” For that is what Mr. Stevens is, a butler in a “distinguished” household. Or rather, he was; Lord Darlington is gone now, and his English manor taken over by an American. Stevens comes to the conclusion that great butlers possess dignity, and cites several anecdotes, some about his butler father, to illustrate his point.

But isn’t the phrase “great butler” an oxymoron? How can a member of a “lower” class be great? Stevens’ eventual answer to this implied question is that those who cannot achieve greatness themselves achieve their purpose by serving the great. And that is the lynchpin that connects this novel with Never Let Me Go. The master/servant relationship here is replaced in the later novel by the more extreme human/clone relationship. Ishiguro explores both “underclasses” with finesse.

Both groups are isolated, marginalized. Both exist to “serve”; the clones, in case you haven’t read NLMG, are being raised to provide “spare” organs for their “originals.” However, both groups are educated. Stevens, for example, presents such a polished façade that a group of villagers mistake him for a gentleman, while the initial setting of NLMG is a school, where the young clones are educated in sport and art, among other subjects. This education is ironic; both groups are treated like circus animals in a way. Certain butlers are called on to demonstrate their knowledge of trivia, while the educators debate whether the clones’ ability to produce art means that they have a soul.

But both groups’ service is tragic. Stevens devotes thirty loyal years to a man who ends up being a Nazi sympathizer. The clones, of course, will die after their final organ sacrifice.

Mr. Stevens may be dignified and loyal, but he is also oblivious, humorless, and overly devoted to his profession -- nearly inhuman. The figure of Miss Kenton, the housekeeper in the same estate as Mr. Stevens, serves as counterpoint to Stevens’ two-dimensionality. Miss Kenton, with her flowers, her passionate support of her staff, her fruitless efforts to connect with Mr. Stevens, is the bleeding heart of the story. She shows us what it means to be human: to love, to be curious, to share banter and warmth. To connect. The clones, of course, have all these traits too; they simply are never allowed to opportunity to share them outside their own “class,” and certainly not with those who will be cannibalizing them. In the end, fortunately, Stevens realizes the true difference between him and his “master”: at least the lord he served had the option to make his own mistakes, while servants (and clones) do not.

Ishiguro demonstrates amply why he earned the Nobel Prize in 2017. The novel is engaging from the very beginning, and delicately crafted throughout. The book tiptoes slowly but inexorably toward the truth about Lord Darlington, and Miss Kenton’s unrequited love. I’ll be reading more from this master writer.

What comes to mind when I say “S.E. Hinton”? The Outsiders. Pony Boy. “Nothing gold can stay.” Maybe Rumble Fish. Or Matt Dillon.

I listened to this book on CD. After the first disc, I thought I’d be listening to the tale of a troubled young man, very similar to those titles I just mentioned. We get a glimpse of Jamie Sommers’ childhood, then his wild times as a sailor and smuggler. We know he has gotten into trouble because he’s telling all this to a psychiatrist in a mental institution.

However, on disc two, things get weird. The book becomes a classic tale of…boy meets vampire.

First of all, vampire gets cured? I had to make sure I hadn’t skipped a disc when this just casually came up. While Jamie is “away,” the vampire somehow meets AND IS CURED BY a doctor/historian named Louisa.

So the relationship of SLAVE to MASTER becomes just another friendly employer/employee, roommates in a big, haunted house kind of thing, with a casual mention of Stockholm syndrome. No big deal, right? The two men even go on a cruise together, where they both find romantic and sexual adventure.

My only way of processing this is to think that Ms. Hinton was somehow, consciously or unconsciously, writing an allegory about child abuse. Our vampire, Grenville Hawkes, is the abusive parent, and Jamie the child. Jamie is absolutely traumatized by Grenville’s abuse, is helpless to escape it, and therefore copes as best he can. However, when Grenville “reforms,” Jamie gradually comes to trust him, and they have a mutually respectful relationship. Is this possible in formerly abusive parent/child relationships? I don’t know if it’s common, but I’ve heard of it in my own extended family.

The attempt falls flat, though. Too much telling, not showing, especially about important relationships. For example, you can never tell if Louisa’s attitude toward Jamie on a given day will be bossy or fond. No real development happens for her, she just shifts personalities as needed for each scene.

So anyway, if you want to read a vampire tale that does not have sparkly skin or werewolves, but does have male bonding on a cruise ship, give it a try. It may be the weirdest book you’ve read all year.

Posted by Stephanie Turner at 9:20 AM No comments: 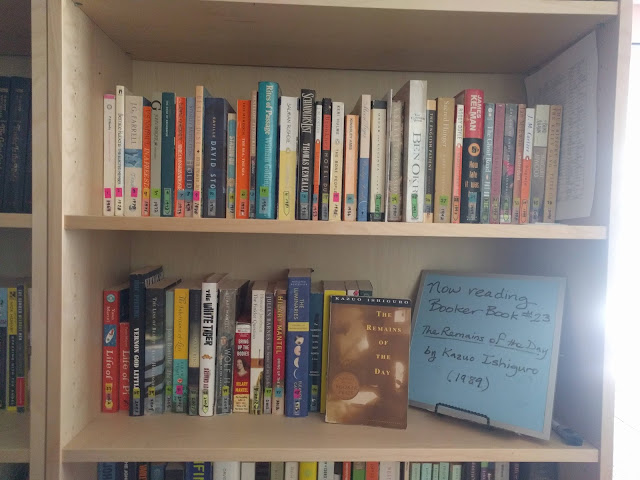 Posted by Stephanie Turner at 9:15 AM No comments:

Well. That was a struggle (a week is a long time for me to get through a book this length). I had only the vaguest memories of the movie, and anticipated a pleasant read. I am willing to put a lot of the blame on myself, distracted by the transition from teaching to summer vacation, and a visit from my lovely mother-in-law, but this book just did not hold my attention. I was grateful for the short chapters that allowed me to take frequent breaks.

Peter Carey’s Oscar and Lucinda is the story of two originals, misfits who simply cannot fit in anywhere but with each other. Oscar is the son of an English minister in a strict Quaker-like sect, and Lucinda the daughter of bohemians in Australia. They each become gamblers, of very different sorts, and meet on an ocean liner. Their ensuing romance is painfully awkward and tragic, and hinges, of course, on a bet.

I didn’t really start enjoying the book until about three quarters of the way through, when events started accelerating. However, I was put off when characters started popping up and making major contributions to the plot without my feeling that I really got to know them.

Again, I’m willing to admit that I was not in the best frame of mind to appreciate this book, but I found its rambling, roundabout (and intentionally misleading) plot disappointing.

Posted by Stephanie Turner at 10:38 AM No comments: 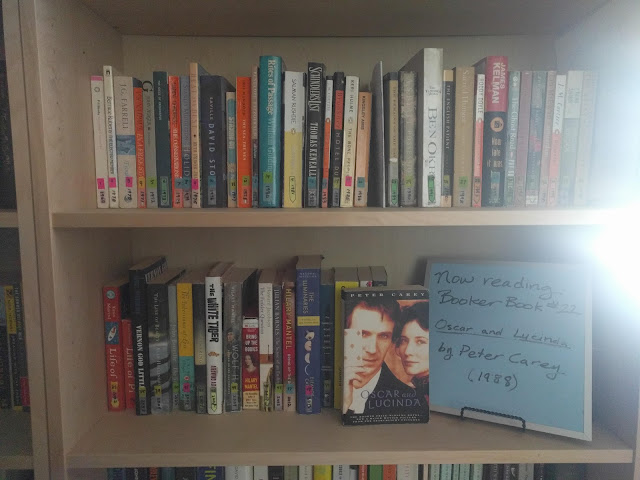 Posted by Stephanie Turner at 3:57 PM No comments:

Moon Tiger by Penelope Lively is the story of a historian. Claudia Hampton is dying, and she wants to write a history of the world. But what she ends up writing, of course, is the history of herself. We begin with the characters whom one would expect to be the most important to her, Claudia's daughter Lisa and Lisa's father Jasper, but they end up playing only minor parts in the end.

Before we go any further I'll tell you what Moon Tiger means, because I did not understand it until about a third of the way through the book. Moon Tiger is the brand name of an anti-mosquito coil, and in Claudia's mind its scent is strongly associated with her first true love, Tom. Also, since it burns away within a limited amount of time, it comes to represent Claudia's own life ticking away.

Tom and Claudia meet in Egypt during World War II. This portion of the book strongly reminds me of The English Patient, which will win the Booker Prize a few years after Moon Tiger. I have to wonder if Michael Ondaatje was influenced by Lively's novel. I'll know better when I reread The English Patient in a few weeks.

What sets this novel apart from your typical World War II love story is the fragmented point of view. That is probably also what won it the Booker Prize. Various portions of the story are told in overlapping segments from different perspectives: Claudia's of course, but also Jasper's, and Lisa's, and Tom's. Oh, and her brother Gordon's.

Aside from the expected themes of love and loss in wartime, other ideas that come up are the difference between history and entertainment, nationality's role in nature versus nurture, and the mother-daughter relationship. Oh, and incest.

At any rate, it's a well-written book about a woman succeeding in a male-dominated field. I hope I have as rich a life as Claudia's to look back on when I am on my deathbed.


PS This is my first blog post composed and published entirely from my phone.
Posted by Stephanie Turner at 8:52 PM 2 comments: