The Bookshop of Yesterday's Cliches

The Bookshop of Yesterdays, by Amy Meyerson (2018) 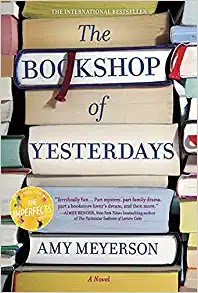 The more I think about it, the more disgruntled I am that I finished this book instead of setting it aside, as I was tempted to do one-third of the way through. It is a mish-mash of chick lit cliches, well done, but still.

Big cliche 1. A death brings Our Heroine back home from the Big City. Granted, home is LA, an even bigger city than Philadelphia, where she teaches history. But the go-home-for-a-funeral-to-rediscover-yourself bit has been done to death (pun intended).Big cliche 2. That death sends her on a scavenger hunt to uncover a Big Secret. Uncle Billy left our heroine a book store, so he uses books to send her clues to a Big Secret in her Past. Cute. Too cute. Any normal person would just write a letter.Big cliche 3. The bookstore is going under! Let's throw a party to save it! I am so very tired of the "let's save our neighborhood business with a party" trope. It's just an excuse to bring all the characters together at the end.Big cliche 4. Your Past is Not What You Think! I'll stop there, because spoilers, but really? If you read enough chick lit, you won't believe anyone's version of their past.Anyway, like I said, it is well written. And there are lots of literary references. But if you have a cliche-detector AT ALL, you may be disappointed.
Posted by Stephanie Turner at 7:18 AM