A Triptych: Women and Art

I recently read three books in a row, not exactly on purpose, about women and art.

I'll start with the most popular and my least favorite: A Piece of the World, by Christina Kline Baker, author of Orphan Train. This is the fictionalized story of the life of Christina Olson, from the iconic painting "Christina's World," including her relationship with the man who painted her, Andrew Wyeth. The novel provides a slice of life in rural Maine, from Christina's parents' time through World War II and approaching our day. We gain insight into what it meant to be disabled then and there; I learned that Wyeth had his own disability, a limp caused by a hip defect. It is a well-written book, but the reason it was my least favorite of these three is that the jumping around in time is disorienting. By now, every reader of modern popular fiction is used to narration that shuttles back and forth between now and the past. But this book's chapters could plop you down anywhere from 1899 to 1980, and I couldn't sense any rhyme or reason behind the frequent shake-ups. Those who loved Orphan Train, be prepared for something quite different but engrossing in its own way.

Next, I highly recommend The Last Painting of Sara de Vos, by Dominic Smith. This is a narrative that more skillfully weaves together various stories and time periods; each one is so distinct that I had no trouble keeping up. Sara de Vos is a fictional painter who lived and worked in the Netherlands in the 1600s. The other main characters are a New Yorker who has inherited a de Vos painting, and the young woman who is hired to forge it. The way these two modern characters come together and discover more about the elusive artist echoes the painter's own evolution, through hard times to finding love. I was reminded a bit of The Glass Hotel by Emily St. John Mandel, in the way that characters present different facets of themselves to others. It is as much about artifice as art, fascinating and well written. 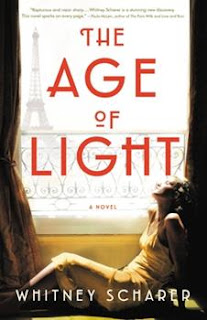 Finally, my favorite of the three was The Age of Light, by Whitney Scharer. This novel is based on the true story of Lee Miller, an American fashion model who moved to Paris to reinvent herself as an artist. She becomes apprentice, and later lover, to the famed Surrealist photographer Man Ray. Together, they influence a modern art movement. Later, Miller documents World War II. It's a compelling book about the difficulty of being a female artist in a man's world, with lots of titillating glimpses into Paris of the 1920s and 30s.

Posted by Stephanie Turner at 4:49 PM