I've been on a Penelope Lively kick lately. I first discovered her on my mission to read all the Booker Prize winners in 2018. Her Moon Tiger won for its beautiful depiction of romance and nostalgia set in World War II. Her books that I've been reading lately take place for the most part in more recent times.

The Photograph is the story of a man who discovers, after his wife's death, a photograph of her holding hands with another man. Whom he knew. During their marriage. So Glyn sets out on the warpath to unearth everything he can about Kath. The unexpected discoveries end up overturning more than his own understanding of his departed wife. It's great writing, with varied and believable characters, and unforeseen consequences, of course. 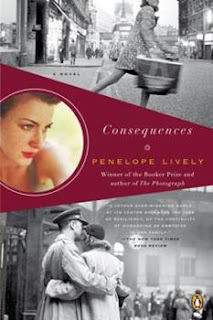 If you like The Photograph, you might love, as I did, Consequences, which in a similar way explores the consequences of a chance meeting, this time reverberating throughout generations. What I love about Consequences is how it touches on so many varieties of romantic relationship: marriage for love; marriage for friendship; an employer-employee affair; a gay couple; and so on. The narrative begins in the thirties, brings us to the present day, then loops back to the beginning in a most satisfying way.

Family Album, on the other hand, focuses on, as the title indicates, family relationships -- and secrets. Alison and Charles live in a lovely home where they have raised six children, with the help of au pair Ingrid. The children, adults now, return home for various occasions, comparing notes and uncovering a hidden truth about one of them. It's a delicate exploration of the complexity of familial roles and relationships.

Finally, How It All Began follows in the steps of The Photograph and Consequences: how does one chance act, in this case a mugging, have a butterfly effect on many lives? After the attack, Charlotte must recuperate from her broken hip with daughter Rose. This disruption has consequences for Rose, her employer, her employer's niece, and the student Charlotte starts tutoring during her convalescence. It's a beautiful story, wistful at times, about possibilities glimpsed, seized or left behind.

In all, Lively writes stories that dig into relationships, focusing on how people react to and grow from drama, rather than the drama itself.

Posted by Stephanie Turner at 9:01 AM